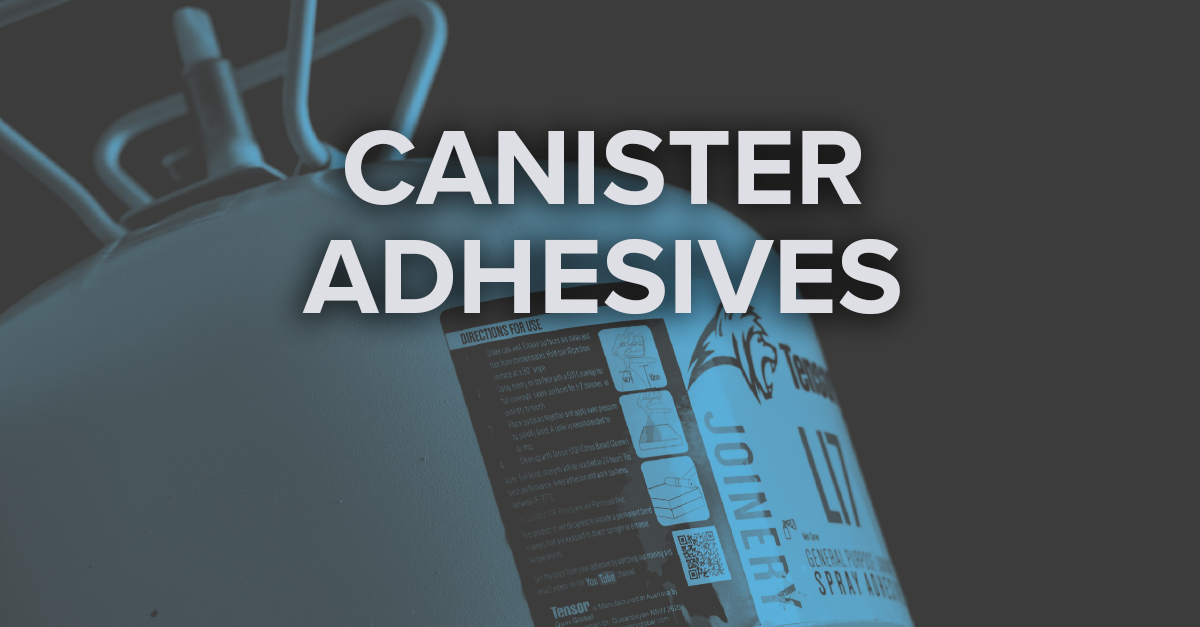 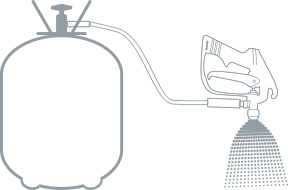 Because a drum-based adhesive is regularly exposed to the atmosphere, each time the spray pot needs to be refilled, it requires a large amount of solvent in the adhesive mix to prevent it from setting inside the drum. The canister, however, is pressurised and is never exposed to the atmosphere, so canister adhesives use much less solvent and a higher portion of solids in the adhesive mix. In fact, most drum-based adhesives can have as little as 14% solids in their mix, where as canister adhesives have up to 40% solids.

This, along with the self-contained packaging are the main contributing factors to most of the benefits of the canister system, including:
• Faster tack off time
• Greater Coverage
• Fast Application
• Reduced VOC’s
• Easy clean-up & maintenance

That’s a saving of 8 - 12 minutes per bond, which can really add up over the course of a day.

With an adhesive that has only 14% actual solids, it can take several layers of adhesive to achieve a high enough coverage to bond substrates together. With a canister-based adhesive, the high percentage of solids means that it only requires one or two passes (depending on the substrate) to achieve the desired coverage.

Taking into consideration the increased solids in the canister adhesive, it can (depending on the substrate) achieve two or even three times the coverage of a full drum of liquid adhesive. On top of this, however wastage must also be considered.

Drum-based adhesives always produce waste. Aside from the adhesive that dries on the walls and base of the drum during use, it is also impossible to extract every gram of adhesive from the drum, simply because of the shape of the drum itself. 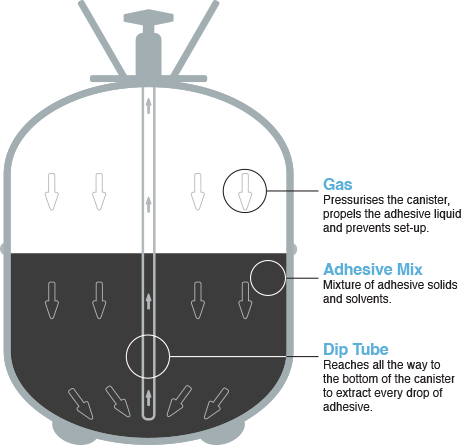 Aside from the fact that only one or two passes are required to apply the canister adhesive, compared with the many required for a drum-based adhesive. Being self-contained and applied directly from the canister means that there is no down time for refilling the spray gun during the application process.

VOC concerns stem from adhesive sprayers breathing in the solvent vapours while spraying the adhesive. As previously mentioned, canister adhesives, by their nature, have less solvents to begin with, reducing the risk of inhalation by sheer reduction in the amount of solvent that must evaporate before the adhesive becomes tacky enough to use.

Canister adhesives basically never go off. They can sit on a shelf for years on end and as long as they are not depressurised, they will work effectively whenever you choose to use them. Once the gun and hose are connected, they can remain connected and pressurised until the canister is empty, or up 4 or 5 months. Once the canister is empty, the gun and hose can simply be transferred to a new canister and continued to be used. If the gun and hose are being transferred to a canister with a different type of adhesive or will be sitting on the shelf unconnected for a period, the only cleaning they require is to be emptied of adhesive before they are stored, which can be done by turning the canister off and continuing to spray the gun until all residue is removed.

It is recommended that the gun tip be cleaned from time to time when adhesive builds up on the outlet. This is done by spraying the nozzle with an adhesive cleaner and brushing the built-up adhesive off with a wire brush.

The gun used for drum-based adhesives, in comparison, needs to be cleaned with solvents at the end of every day. These guns are particularly renowned for becoming clogged and if clogging happens, the entire gun must be replaced. Any spills generated in the process of transferring liquid from the drum to the gun must also be cleaned immediately to prevent setting.

Once all these factors are understood, it is easy to see why canister adhesives are becoming more popular and are considered the way of the future for many in the industry.

Cold Temperatures and Adhesives: What You Need to Know